For great results every time count on the Callicrate Bander

Cutting out early castration could steer your beef outfit to greater profitability and improve meat quality according to cattle producers who are leaving their bull calves intact longer and then banding them.

“If you handle your cattle as if you were taking them all the way through to the retail meat counter and do everything possible to manage them right, you just have a better product and that benefits the entire industry,” says rancher Tom Hendrix.

Hendrix runs a 400-head cow-calf and stocker operation near Wray, Co. He estimates that delayed castration improves the performance of his stocker calves by 40-50 lb. per head. 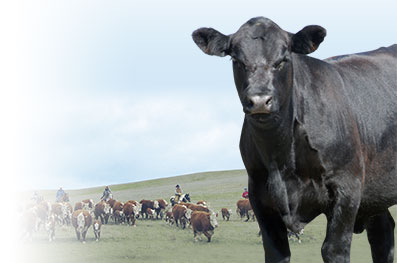 “These days you’ve got to take advantage of every benefit you can,” he says. “This is one thing we can do that basically isn’t costing us anything for the dividends it pays.”

Hendrix leaves his bull calves intact to 500-550 lbs., when he pre-conditions them for his backgrounding program. “You pick up the extra weight, and you have a more muscular, slimmer calf that isn’t carrying a lot of extra flesh at weaning,” he says. “When I background them, they just keep growing. A bull calf will be in a body condition that is more advantageous for weight gain than a steer. In my program, I go to rye pasture with them, and you can just about see them grow.”

He’s not the only one bullish on the health benefits. “I’ve had two or three neighbors tell me they thought their calves stayed healthier and more athletic,” he observes. “They swear they don’t have fall pneumonia in their bull calves like they used to, thanks to delayed castration.”

PUTTING THE STRESS ON SAFETY

After using the banding procedure in his own ranching and cattle feeding program for years, St. Francis, Kan., cattleman Mike Callicrate designed the only high-tension bander on the market.

Foolproof and easy to operate, the Callicrate Bander reduces stress on both the livestock handlers and the animals. The device incorporates a tension indicator with a unique winding mechanism to insure complete ligation, or negation of blood flow, every time, regardless of the operator or the size of the animal.

“We like it a lot because it has a low complication rate, and that’s a real plus,” says Dr. Lynn Locatelli, a veterinarian with the Twin Forks Vet Clinic, Benkelman, Neb. “We can teach people to use it very effectively and feel comfortable about it. It’s a great tool. It’s just a little easier and quicker to use than any of the other banding tools on the market, which is important, especially when you are doing a large number of animals.”

She often recommends it to her customers who do their own castration. “It works on any size of animal and anybody can use it. That’s the bottom line,” she says.

“The company also has a very good service program,” she adds. “If there’s something wrong, you can send it back, and they will fix it up for you.”

Studies have shown that placing a high-tension band on the scrotum generates a more localized immune response than surgical castration. When done properly, there is no loss of appetite or decline in rate of gain, according to research at the University of California-Davis. Surgically castrated calves generally take 7-10 days of recovery before they start gaining weight again, while banded calves never show any setback, the research showed.

Dan Fields, who sells about 200 feeder cattle annually, confirms those results. “We usually try to get the calves started on feed and then I band them and it doesn’t slow them up a bit,” says the Atwood, Kan., cattleman. “I band some pretty big bulls, too, and they never miss a feeding. I do everything myself, and it’s nice to be able to run them through the chute. I don’t have to wrangle them at the stage when they are hard to wrangle.”

Having the Callicrate Bander on hand increases his options, since he generally sells a combination of home-raised and purchased calves and bulls. “I’m an opportunist,” Fields says. “I like to sit back and look at what will work without being locked into a certain program. Sometimes I like buying bulls and upgrading them. I leave my own bull calves intact to about 600 pounds, which means they stay healthier and perform better.”

As part of a carefully-developed management protocol, delayed castration can add significantly to the value of calves and the profitability of a cow-calf operation, Callicrate says.

Hendrix agrees. “The reason people castrate at branding time is simply a mindset. Everybody’s always done it that way,” he explains. “But that is changing, because the industry is beginning to demand pre-conditioned calves. Order buyers and sale barns will discount calves that haven’t been pre-conditioned. Otherwise, the sickness in the feedlot is just too costly. “

Ranchers who retain ownership or sell their calves to value-added beef alliances might get further benefits from delayed castration by leaving bulls intact while they are on feed.

Those advantages can offset the need for synthetic growth implants.

Consumer studies, funded by the beef check-off program and administered by the National Cattlemen’s Beef Association, have shown that beef from implanted cattle is noticeably tougher. Consumers also have safety concerns regarding use of artificial growth promoters. Those factors have contributed to consumer interest in hormone-free source-verified beef, which often brings a higher price and rewards natural beef producers with price premiums.

Callicrate’s own branded beef program, Ranch Foods Direct, buys cattle from independent farmers and ranchers who follow his management directives. “We purchase all our calves and finished cattle in the competitive market,” he says. “For calves to qualify they must be certified, born and raised in the USA, of top genetics, implant free, and preconditioned according to our protocol to avoid sickness.”

To insure quality and consistency, the cattle are slaughtered young using a revolutionary slow, safe processing method known as “Rinse and Chill” technology. “We want the calves to be ready to market at near one year of age with approximately 180 days on feed,” Callicrate says. The result is a remarkably flavorful, tender cut of beef that is lower in cholesterol.

“Our Naturally Tender Beef is quickly winning fans for its consistency, quality, and health benefits,” Callicrate says. “We are finding that natural beef is an alternative discriminating consumers and restaurants really want, and they are willing to pay more for it. Since we processed our first cattle two-and-a-half years ago, we haven’t had a single tough steak, which stands in sharp contrast to commodity beef’s poor track record. People often comment our top sirloin eats like filet mignon.”

For more information on the Callicrate Smart Bander, the Callicrate cattle-management protocol or to learn more about Ranch Foods Direct call 1-800-858-5974 or 785-332-3344 or visit the website at CallicrateBanders.com – RanchFoodsDirect.com