Rachel Dodd, the General Manager for No-Bull Enterprises, revealed an interesting factoid during our telephone conversation: there actually are some folks in the Texas Longhorn business who use the Callicrate Bander for de-horning. The bander is widely used for that purpose in other breeds of cattle, and a similar piece of equipment, the Velvet Antler Bander, is used to de-antler elk and deer species. But de-horning Longhorns? 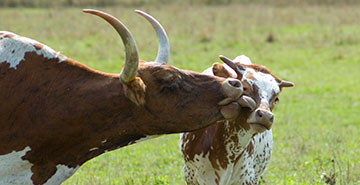 The original purpose and most widely held use of the bander is bloodless, humane castration, and since its introduction in 1991, has proven to be an extremely valuable tool in profitable animal husbandry. The device was invented by Mike Callicrate, St. Francis, Kansas, and is still manufactured there by Ross Manufacturing. Callicrate used the delayed castration procedure in his own ranching and cattle feeding operation prior to offering it to the public.

Said to be foolproof and easy to use, the Callicrate Bander reduces stress on the handlers as well as the animals. The device uses a tension indicator for proper pressure to completely stop blood flow to the scrotum and testes, producing a more localized immune response than surgical castration. Research has shown that surgically castrated calves may require seven to ten days recovery time before they start gaining weight again. With the banding procedure properly done, there is no loss of appetite or decline in rate of gain.

Leaving bull calves intact until they weigh 500 pounds or more can maximize the benefits of natural testosterone on rate of gain, feed efficiency and muscle development. Producers who utilize this management protocol say that delayed castration can add significantly to the value of calves, not only in the additional pounds, but also due in part to consumer interest in beef that is hormone-free. Anecdotal evidence also suggests that the calves stay healthier, more athletic, and more likely to remain free from fall pneumonia.

Rachel Dodd, who handles the sales of the bander, has her office at the Callicrate ranch. “Right now,” she said, “I am out here seven miles southwest of St. Francis, Kansas. We have a feeding operation here and a cow-calf operation — we are raising our own calves and shipping them, when finished, to Ranch Foods Direct in Colorado Springs, which is another one of Mike’s businesses that sells meat to the wholesale and retail market.”

“In the next few months,” she continued, “we will be coming out with a new bander that will be called the Callicrate ‘WEE’ Bander. This is for newborn baby calves, goats, and lambs. It will definitely be more humane and less stressful than other methods, as proper tension is applied and surgical complications are avoided. It will be available in the fall.”