For great results every time count on the Callicrate Bander™

GET HIGH PERFORMANCE WITH
HUMANE CASTRATION

The Callicrate Bander™ has earned a reputation as the most humane and effective bloodless castration method on the market, recommended by veterinarians, animal handling specialists and cattle producers.

“Banding is better than cutting for the bigger animals,” says Temple Grandin, a professor of animal science at Colorado State University and one of the nation’s leading experts on humane animal handling. “England’s rule is that after four months they require an anesthetic (for surgical castration.)”

The tightness of the band is essential to minimizing discomfort and complications, which is why she endorses the Callicrate Bander™.

The sophisticated winding mechanism insures proper tightness, and the rubber tubing of the bands is specially formulated to withstand and maintain the high tension stress needed to achieve perfect results.

“You have to make sure you get the band on really tight over the testicles, or they will swell. With the Callicrate Bander™, you can get it on super-tight,” Grandin says.

Another benefit of using this method, she says, is that the animals won’t associate any residual discomfort with the squeeze chute or the livestock handlers who apply the band, which means they are more willing to return to the chute. “That’s because it doesn’t hurt at all when it is first put on,” she says. “Only one out of about 30 animals will show any noticeable discomfort.”

Grandin is considered one of the country’s pre-eminent humane livestock handling experts. She has designed facilities in the U. S., Canada, Europe, Mexico, Australia, New Zealand, and other countries. In North America, almost half of the cattle are handled in a center track restrainer system that she designed for meat processing plants. She has also developed an objective scoring system for assessing handling of cattle and pigs, and is the author of several popular books, including most recently, Animals in Translation: Using the Mysteries of Autism to Decode Animal Behavior.

She has also consulted on animal handling methods with Callicrate Cattle Co., of St. Francis, Kan., where the Callicrate Bander™ was invented and is still manufactured today.

She reminds producers to keep cattle under careful observation for the first 24 hours after banding and to make sure they each receive the required tetanus shots, as a precautionary measure, prior to the procedure.

Tom Hendrix has been using delayed castration on his ranch near Wray, Colo., for roughly 15 years and is very pleased with the results.

… using the Callicrate Bander reduces stress on the animals – and on the operator.

“With the last ones we did this fall, it was amazing,” he says. “We did a hundred of them in a couple to maybe three hours. By the time we were done, when I put out feed in the bunks, every one of them was lined up at the bunks. They get up right away and go eat.” That’s why he continues to use the Callicrate Bander™.

“I do it this way because there’s just less stress on them. And it’s easier on the operator, too,” he adds.

Using delayed castration also benefits him by increasing his marketing flexibility. With the enhanced performance from bull calves left intact, he doesn’t need to use growth implants, which means his cattle qualify for natural beef programs. “If I’m doing delayed castration, I don’t need to use hormones, and I definitely don’t want to implant my heifers because I retain the top end of them or sell them to someone else as replacements. So I just don’t have a need for the labor and expense of implanting.”

Hendrix produces about 300 top-notch commercial Angus calves annually with a reputation in the marketplace for performance, quality and consistency.

By delaying castration, purebred producers also gain increased management flexibility, notes Ralph Miller, a veterinarian from Glendive, Mont. Purebred operators have the option of waiting to see how their bull calves develop before deciding whether to leave them intact for use as bulls or sell them as feeder cattle. The Callicrate Bander™ allows castration at older ages and heavier weights without complications, discomfort or loss of performance. 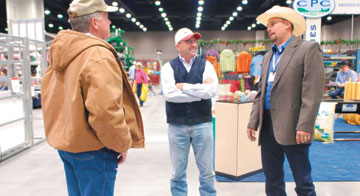 “The people I’ve talked to who use this — and who have used it for quite awhile — like it because the animals are going right back to eating,” he says. “No-Bull Enterprises has done the research, and they have all the information on how to use ligation correctly. You’re seeing basically no hemorrhaging and no swelling with this method, because it is a pure cut-off of circulation. It does exactly what it says it’s going to do every time.”

McBurney plans to put that into practice on his own farm.

“We will be using delayed castration,” he says. “I’ve always done delayed castration, to about 550 pounds, but never took it to the 700-750 weight. I’m really excited to see what’s going to happen to our critters when we take them to 750 pounds, especially in our region where we have so much grass and tremendous natural resources.”

For goats, banding is the ideal castration method.

The Callicrate Bander™ offers enormous versatility. In addition to castration, it can be used for horn removal of large horned animals. It is not limited to cattle, but is also effective on several other species of livestock, including sheep and goats. Goats, in particular, benefit from the delayed castration banding method because it allows the urethra to develop and reduces the incidence of kidney stones and other urinary tract problems.

“I have had a Callicrate Bander for about four years. It has never failed me, and never failed to do its job on all size cattle. It has been the best piece of equipment on my farm. I have yet to even change a pull string.”